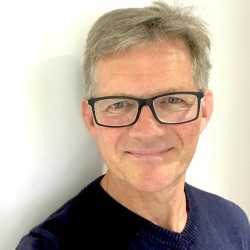 I started writing poetry when I was 43. I was seeing a therapist and when our conversation turned to the future, I said that one day, I would love to write a song that I and others would love to sing. It was an exciting dream.

That afternoon, while pedalling round Windermere, the first few lyrics came to me. Some weeks later, I attended a course run by the Arvon Foundation with the Irish poet, Paula Meehan, and stand-up comic, John Hegley, as tutors. My early poems were personal and cathartic. More recently, they’re philosophical, ethical and human.

I enjoy open mic nights and I’ve read at the Brewery in Kendal, The Swan in Ulverston, Foxes Cafe in Carlisle, the Brunswick Arms in Derby, the famous Newyorican in Manhattan, NYC and at Kwani?, Club Sound, in Nairobi, Kenya.

I occasionally produce a pamphlet of selected poems under my own publishing imprint, Words That Move.

‘My Toybox was my Treasure Island’ appeared in The Poetic Bond, an international anthology of online poetry, edited by Trevor Maynard, published in November, 2012. ‘Fire Fighter’ featured as a sound installation at ‘White Watch’, an art exhibition at the Old Fire Station, Carlisle in September, 2015. ‘The Ocean Cries’ was published in Watershed, an anthology of Cumbrian poetry written in response to Storm Desmond, December, 2015, edited by Nick Pemberton, Geraldine Green and Ann Wilson.

Writing poetry has done more for my personal development than anything else. It improved my self-awareness, resolved personal and ethical dilemmas, broadened my mind and expanded my vocabulary. Without question, it helped me be myself and improved my effectiveness in every day life.

I FELT IT, THEN

'Poetry is a way of taking life by the throat.'

'There is no greater agony than bearing an untold story inside you.'

If I were fighting for my life, writing poetry would be my last obsession.